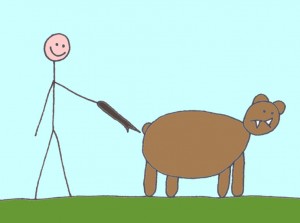 What the hell’s with all the bears? There’s Smokey and Teddy, Fozzie and Yogi. There’s the Three Bears, the Berenstain Bears, the Care Bears, Gummi Bears and the Hair Bear Bunch. There’s a Sugar Bear, a Pooh Bear, a Briar Bear, Little Bear and the Bear Country Jamboree. Everyone has their favorite, but probably not Teddy Ruxpin. Skullard’s favorite is the one from The 13 and a Half Lives of Captain Bluebear. That bear is a pirate bear, which means there’s probably a ninja bear out there somewhere, but we’re too lazy to Google for it. What’s with all this bear-love? (A term we advise you NOT to Google, by the way.) What’s this human fascination with huge-ass creatures that can rip us in half? Why do we want to turn them into cute little sweeties that want to sell us dryer sheets, root beer, Coca Cola and butt wipes? Those hairy fuckers are lethal; they’re not all Gentle Ben. Stop cozying up to these bears, and if you’re Russian, stop keeping them in your bars and serving them drinks. Sure, it’s SO hilarious to watch a massive ursine brute get slowly bent on vodka, but then what? Then you’ve got a drunk, pissed and probably hungry bear on your hands. Holy shit-in-the-woods, What Could Go Wrong!?!

1988’s Ghost House is a piece of shit. Sorry, there just isn’t any way to sugar coat this turd. An amature radio nerd gets a cry for help from the future, goes to where the signal originated and finds even more shiftless twenty-somethings hanging out in ambiguous relationships. Oh, and there’s a ghost in a house. Specifically, there’s the spirit of a dead girl who killed her parents with the assistance of a clown doll from Hell. How this clown never got mass marketed from the strength of this film, we’ll never know. Luka rates this time-suck as a Lousey Unintentionally Bad Movie, and this film caught her on a decidedly good day.

In this week’s appropriate but pointless educational short, Goldilocks and the Three Bears (1958), the classic fairy tale is acted out with a cast of live bears. Don’t worry. The bears are all on fishing lines, so everything’s perfectly safe. What could go wrong?

Once again, here’s a shout-out to the talented Kevin MacLeod over at Incompetec.com. Is it the end of your movie, and your two protagonist who had been separated during the alien battle finally finding each other, locking eyes across the desolated street carnage? As they stumble towards each other, daring to smile, scraping alien muck off their shoulders and forearms, this should be playing as they come face to face, trade a couple of quips, and fall into each other’s arms.

From Skullard’s Postcard Collection: The caption on the back of this one says, “Now who’s after whose porrige?” Gramatically correct, but stupid. There’s only two bears, not three. And the spazz-mo with the fishing rod sure as hell ain’t no Goldilocks. Personally, I hope the bears take a pass on the potato chips and rip into a fresh pack of innards. It would ruin a clean, white t-shirt, but since I don’t know the guy, it would be kinda funny. 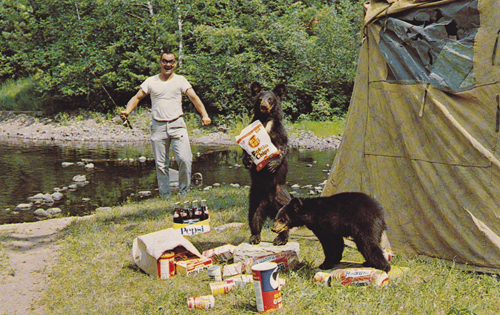